When did your Christmas start this year? Boxing Day 2016 when the sales began? A few hundred days ago when the shops started stocking Christmas-specific tat? Perhaps it was on the last day of work just hours before the man in the red suit flew overhead (did you track him on NORAD?). Maybe, just maybe though, it hasn’t happened or will never happen. Am I maudlin? Perhaps. I’d say realist.

You see, whatever your beliefs, there is no denying the fact that there are two real extremes at Christmas. Those that have and those that wish they had. I am very fortunate to be in the former group. Whilst not a multimillionaire by a long shot (a really long shot), I’m comfortable and lucky enough to have a roof over my head and a family that cares. Sadly, figures released by Shelter show that more than 250,000 rough sleepers exist in the U.K alone. The government suggests that it is pumping more than £500 million in to solving the situation, but it seems that it is down to local communities once again to actually make progress in helping our fellow man at this special time of year, and yet, despite their caring and passion, there is always some adversity they have to face.

Take my hometown of Oxford. The soup kitchen, a deliciously simple idea and staple of the city for, prepared once again to throw open its doors for the homeless at Christmas when just a month before the big day, their brand new oven caught fire. Now, I’m not a chef but I for one know that that causes a bit of a problem unless your microwave is more of a maxiwave to fit a hundred bowls. Thankfully, crisis averted and the charity, led by 87-year-old Icolyn ‘Ma’ Smith MBE, was able to feed those well off again.

Another really lush idea came to fruition earlier this week too when a former cosmetic store in Oxford that has stood empty since the regeneration of the Westgate centre threw its doors open to the homeless, the contents of the new shelter begged, borrowed, and donated by residents and businesses from across the city.

And in the capital itself, Euston station served 200 Christmas dinners in order to keep a few people, not just fed and off the streets for a bit, but more importantly, in good company. I think that’s the key here. Helping the homeless is simply helping our fellow man, and the overarching theme is of community spirit, which seems to be becoming more and more prevalent in today’s society. That’s the spirit of Christmas though, isn’t it? Community spirit.

But when 12th night arrives in January, and no doubt sooner, will we all once again retreat into our lives and forget our fellow man again until next year? Probably, but if we can get creative with how we help each other on a few days at this time of the year, why not all of the time? That’s right. Here he goes again talking about creativity, but it’s part of who I am and is crucial to how we can generate not only exciting new plans, but potentially very profitable ones too. It makes us think, to coin a cliche, outside of the box. It’s not a new thing being creative.

I am reminded how 113 years ago, on the battlefields of World War One, there were again two extremes at Christmas. Despite the horror of war, two nations who only spoke their mother tongue plus maybe the odd word of the other’s language, and were essentially living in the worst conditions ever, put aside their differences for Christmas Day to celebrate and rejoice in the fact that they were all just humans. They were creative with it though, placing candles around the tops of trenches, playing football matches in no man’s land, and exchanging what simple items they had on their person. We could learn a lot from that today.

If statistics are right, we have in the region of 33% of the country’s population living in poverty, 86% of homeless people having reported mental health issues, whilst only 44% have actually been diagnosed with them. This is nearly twice as many as ‘average Joe’.

So, let’s summarise things a bit here before we conclude or at least think of the next step. We have an ever-increasing population of our fellow man (and woman), who are living in poverty or are homeless. They are the ones at increased risk of mental health issues, and the ones to help them are their fellow man with limited resources, so what can be done?

You’re now expecting me to give the answers, right? Mr Miracle Man. Wrong! I’m one man. I don’t have all the answers. What I do know is that creative thinking between us all could really help. Governments will supposedly invest money, but it seems as though it will be up to us to decide how we prevent our country from becoming one where every street corner is overcrowded with Alfie, Bette, Charlie, or Zach. That’s right, let’s not forget these human beings do have names as well. And those in poverty are not just on the streets but are living in accommodation, perhaps even next door to where you are now, but without the means to advance their lives further.

So what creative methods exist? Sure, community cohesion is an excellent start, but how about skill sharing? Big businesses could really help here. Perhaps an IT firm could open its doors and develop a scheme that helps develop tech skills. Crucial in the modern world, especially if you are to fill in CV’s or other applications. Could restaurants not teach basic cookery life skills once a week? This would surely be beneficial in developing a greater understanding of healthy and inexpensive meal ideas, and provide a crucial acquisition of essential knowledge as a building block for the future. Maybe, and here’s a mad idea, banks could throw open their doors to teach money handling and saving skills. Other than the cost of heating and lighting, and perhaps a pastry or two, these could be just the know-how that some need to get themselves into a better place. Best of all, it shows somebody actually cares.

I think for me, reflecting on this year, what has been evident is that although money has been particularly tight, the ability to have contact with others both in business and socially, to develop new ideas for money making and life improvement, have been of the utmost importance. We have so many resources available in this life, but we’re not using them to their fullest. We need to develop opportunities, grab them with both hands, and really show what we’re made of.

Whilst we continue to enjoy the festivities, if you are making your plans for 2018 already, don’t forget to get creative, and consider what you can do to change, first and foremost somebody’s life, but also potentially improve your own business, and ultimately, bring about the change that’s needed in the world. You could be a driving force for societal reform. How fantastic would that feel?

To end, a CD I was bought for Christmas is on in the background as I type. It’s a cover version, but the words to the original Farnham’s ‘You’re The Voice’, could not be more pertinent. I leave you with a few of them.

We have the chance, to turn the pages over 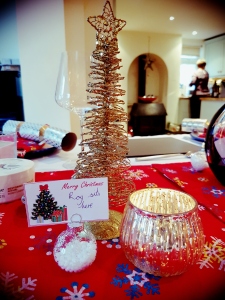 This time, we know we all can stand together
With the power to be powerful
Believing, we can make it better